“We wunt be druv”- Intolerance of Tyranny at Lewes Bonfire

Lewes, a small town just ten minutes from the University of Sussex, makes headlines every November for its famous Bonfire celebrations. In 2018, the headlines were not entirely positive when a photo of a child in a shop window sparked scandal during the lead-up to the event. The child was participating in the Lewes Bonfire Societies’ costume competition, and had dressed as a Zulu warrior complete with blackened face. Many were angered, as ‘blacking up’ is widely regarded as a dehumanisation of people of colour and a trivialisation of their oppression (see, for example, recent debates in the US and the Netherlands). However, the voices speaking out against this form of racism were met by the equally strong voices of those who defended the Zulu costume as an important part of Lewes’ Bonfire tradition and resented the perceived attack on their customs. Both sides cried tyranny, but they disagreed over who was doing the tyrannising. 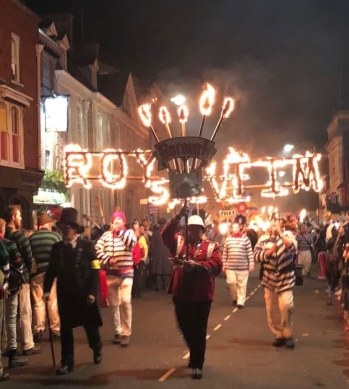 Bonfire Night has always been politically, as well as pyrotechnically, explosive. The festival originates from the failed attempt of a Catholic conspiracy to blow up the Protestant-controlled Houses of Parliament in 1605. Across the UK, November 5th celebrates the failure of this plot, paradoxically by lighting as many fires and setting off as many fireworks as possible. The Lewes Bonfire celebrations are perhaps the most famous and distinctive in the country. They are marked not just by fireworks, but by elaborate costume parades and the burning of effigies of the Pope, politicians, and local authority figures. The festivities are organised by Bonfire Societies roughly corresponding to Lewes’ districts, who compete to put on the most impressive show on the night. For its participants, the festival is deeply meaningful; simultaneously an expression of patriotic traditionalism and of free-thinking anti-establishment values. For some of its onlookers who are presented with questionable costumes and blackened faces, it is a problematic parading of racist and imperialist elements demonstrating an intolerance of outsiders.

The ‘blackface’ scandal began in 2017, when, in an effort to prove that their Zulu warrior costumes were not racist, the Lewes Borough Bonfire Society invited South African artist Thanda Gumede and his dance troupe, Zulu Tradition, to perform in their parade. Upon seeing photographs of Zulu costumes with shrunken heads, dead monkeys and skulls, Thanda Gumede agreed to perform only if these inauthentic features were eliminated. In addition, supported by a local petition with 1,600 signatures, he advocated for the end of ‘blacking up’. However, Borough members only agreed to restrict black make-up to 50% of their faces. During the parade, they burned a tin of black Zulux paint on their bonfire to symbolise the apparent end of their ‘blackface’ tradition. However, in 2018, upon hearing of the fully black-faced child at the costume competition, Thanda Gumede felt that Borough Society was not truly dedicated to eradicating racism, and refused to participate again, despite protests from Borough Society that the child did not represent them, and was in breach of their agreed ‘50%’ policy. Yet this policy, which still allows half the face as well as the arms and legs to be blackened, does not really address the problem. And furthermore, it is not the only offensive costume at Lewes Bonfire.

Since the 19th Century, the parades of many of the societies have been led by ‘First Pioneers’: a costume category dedicated to exoticised noble warrior outsiders. The Borough Society First Pioneers are Zulu warriors; other Societies feature other racial or ethnic stereotypes, such as the self-styled ‘American Red Indians’ of the Commercial Square Society and the ‘Mongolians’ of Waterloo Society. The ‘First Pioneers’ are followed by the ‘Second Pioneers’, who parade in costumes from British history, such as Tudors, English Civil War Cavaliers and colonial soldiers. The juxtaposition of racially stereotyped, othering costumes followed by those that glorify ‘Britishness’, war and empire create a distinctly uncomfortable and even, for some, a threatening atmosphere. 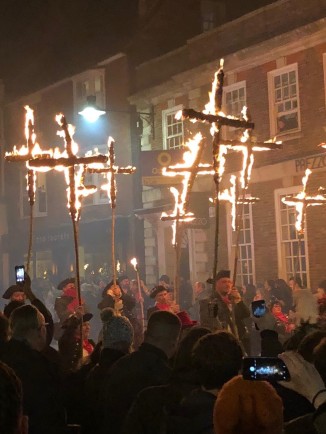 Yet the Bonfire Societies cherish their traditional costumes. They respond to the accusations of racism by arguing that their fathers and grandfathers have imitated and honoured Zulus and Native Americans since the 19th century. Some claim that they dress up to recall the British Empire’s oppression of the Zulus or to “raise the profile of the native Americans’ plight”. Others say that the costumes are just for fun and do not offend anyone. They often evoke the Sussex motto ‘we wunt be druv’ (we won’t be driven), connecting their refusal to conform with romanticised free-thinking radicals like Thomas Paine, who lived in Lewes. Indeed this spirit of resistance has always characterised the festivities. For example, some societies annually commemorate the martyrdom of 17 Lewes Protestants who refused to adopt Catholicism under the reign of Queen Mary I in the 16th Century. In the 18th century, participants fought in the streets with police over their right to use public spaces. Even in the 1990s, society members were fiercely resisting hot dog vendors’ attempts to commercialise the event. This resistance has allowed the festival to survive in spite of the forces of institutional overreach and commercialisation. 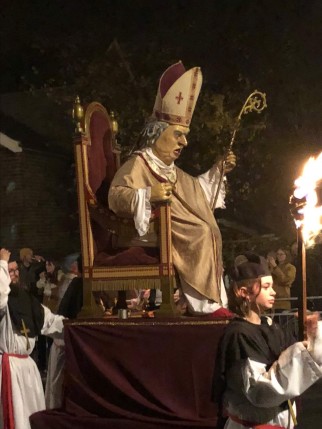 Yet combined with this spirit of resistance, a strand of flexibility can be perceived in Borough Society’s original agreement to modify its Zulu costumes. Despite the claims of traditionalists, many changes to the event have taken place over the years. For example, Societies that burn an effigy of the Pope have made the small but significant concession of burning not the Pope of the present day, but Pope Paul V, who reigned at the time of the Gunpowder Plot. The 1901 processions carried banners that celebrated the solidarity of the ‘sons of the empire’ and expressed support for British imperial interests in the Boer War. An ink drawing of the Borough Society celebrations of 1901 depicts what would now be extremely racist representations of African Americans, that today are nowhere to be seen. Perhaps the most visible change is that the societies, once known as the ‘Bonfire Boys’, today welcome the active participation of women. Nevill Society women parade in crowd-pleasing suffragette costumes, showing that the costume repertoires of the societies are not fixed, but can change to reflect societal trends. Change, then, is as much a feature of the Bonfire’s survival as intransigence. 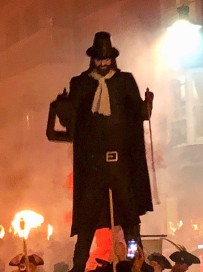 Lewes Bonfire is a web of entangled contradictions that eludes labels. Guy Fawkes, the stooge of the 1605 conspiracy, is simultaneously condemned as a Catholic terrorist, and yet upheld as a radical anti-establishment figure. Catholicism is scorned, yet the celebrations, with their decadent costumes, sensuality, firelight and symbolism are more reminiscent of Catholic carnival than of Puritan asceticism. The historical nature of the costumes and traditions are counterbalanced by the searingly topical political effigies and tableaux. The whole spirit of the celebrations is purported to be an intolerance of tyranny (the Catholic persecution of Protestants), but with its patriotic, traditionalist, and for many, racist atmosphere, it presents more as a tyranny of intolerance.

Perhaps the societies will find a way to incorporate anti-racism into their ideology. It could fit well with their anti-establishment spirit. With the bonfire celebrations’ roots in the experience of Protestant persecution, society members could choose not to participate in the oppression of today’s minorities. Promising signs of change were seen in last year’s costume concessions, even if this year has seen setbacks. Meanwhile, outside pressure increases: the Town Council, with its first ever non-white Mayor, met in November to debate a Diversity Policy that could ban the practice of ‘blackface’ in public buildings (the Town Hall is used by the Bonfire Societies for their costume competition). However, the Council do not have the power to ban ‘blackface’ in the streets. This is a change that would have to come from participants themselves. With their contradictory strategies of flexibility and intransigence in the face of change, it is impossible to predict how the Bonfire Societies will choose to go forward. 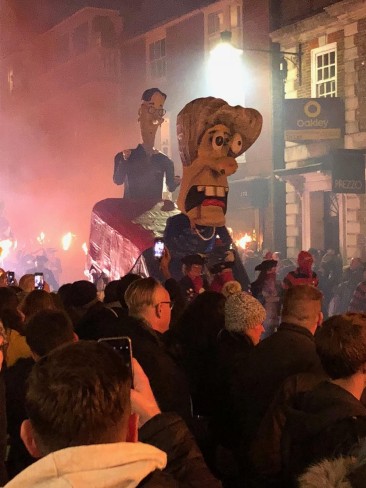 Learn more about the Lewes citizens’ campaign to stop racism at the bonfire here: https://bonfireagainstracism.wordpress.com/

Melissa Geere is a new resident of Lewes and a student on the MA in Anthropology of Development and Social Transformation.

← A Relationship with Fashion: Thoughts from an Anthropology Student
From The Field: Superbowl Sunday, The Dude Abides? →