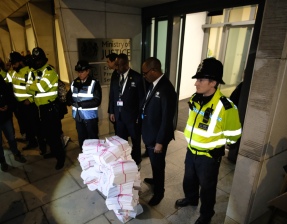 Last Thursday night, the feminist direct action group Sisters Uncut delivered 30,000 sheets of paper marked ‘confidential’ to the door of the Crown Prosecution Service, on Max Hill QC’s first day in post as its head. The CPS is responsible for taking perpetrators of sexual violence to court.  The heap of paper represented the amount of personal data demanded from survivors who report sexual violence. 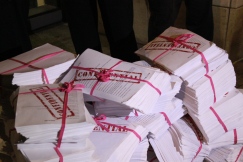 Public outrage over failed prosecutions has resulted in the police increasing demands for access to all text messages, calls, social media and app data. The justification for the introduction of the policy was to make cases more robust and secure conviction. However, survivors are routinely told that their cases will be dropped unless they agree. These dropped cases have resulted in fewer prosecutions for perpetrators of sexual violence. This denies survivors the justice and support that they need and deserve.

The new policy has made the situation much worse for survivors of sexual violence, who already faced having their medical, social services and counselling records trawled through by the police and CPS, handed over to their abusers’ defence teams, and used to undermine them in court. The divulging of the new information they now have to share means that intimate details of the way the survivor thinks and feels about their traumatic assault (eg. details of PTSD) are made available to their perpetrator.  Testimonies at the demonstration showed that this makes survivors feel violated all over again. 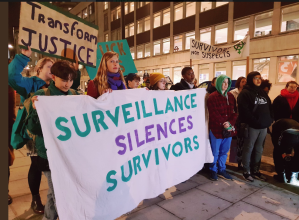 In addition, recently publicised examples show that calls made and texts sent after the assault are being used to argue that the victim was not traumatised enough for the assault to have taken place. In a speech to demonstrators, there was the example of calls to a support helpline shortly after the assault, which showed as an unknown number on the survivor’s call logs, were used by the defence to argue that the survivor was not sufficiently traumatised by the event for it to have happened.  Another example from a leaflet handed out to members of the public stated that “text messages sent after the assault about unrelated topics have been used to suggest that the survivor was not upset enough to have been assaulted”.  Both these examples feed into harmful myths that there is a ‘correct’ way to deal with trauma and punishes those who deviate from this norm.

Campaigners from Sisters Uncut point out that ‘We wouldn’t expect victims of any other crime to hand over all their personal data to be trawled through by police, shared with perpetrator’s lawyers and used to undermine them in court. Why are the CPS demanding it from sexual violence survivors?’

At Thursday’s protest, this sentiment was echoed by survivors shouting, ‘Whoever we text, wherever we go, yes means yes, no means no’. 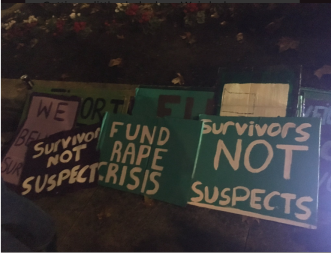 Let’s remember that survivors are put through this traumatic ordeal by the state. It is state violence against survivors. In criminal law, when the harm an action will cause to another person is sufficiently foreseeable, intention to cause the harm is implied by the court. The harm that the disclosure policy causes to survivors is entirely foreseeable by a ‘reasonable person’ (the legal test) and therefore Sisters Uncut demand that the CPS stop this violent policy. It is gendered state violence and an intrusion into survivors’ lives in order to discredit them.

One of those who took part in the demonstration, who asked not to be named for their protection, said: ‘I already felt like the perpetrator had taken so much from me. For the CPS to also take my counselling notes and phone records and share them with him as evidence felt like a whole new violation. To have them laid out in full in front of a courtroom full of strangers judging you, is beyond explanation. A system that puts survivors through that in order to secure a conviction should not be allowed to call itself a justice system.’

Another, who similarly asked for anonymity, added: ‘It took me almost two years to get to court, then my mental health diagnosis was shared with the defence. I was labelled “unreliable”, “attention seeking”, “promiscuous”, “unstable” and “prone to delusions”. Despite CCTV and DNA evidence, he was found not guilty.’

The message from demonstrators to Max Hill was simple: ‘STOP TAKING SURVIVORS’ PHONES. Survivors should NOT BE INVESTIGATED.’

In a speech addressed to Max Hill, a demonstrator stated,

‘You are coercing survivors into letting themselves be investigated, into allowing this massive invasion of privacy, because you don’t believe survivors. Well we are here because we believe survivors. We know that most survivors already do not report to the police, and now you are putting vulnerable survivors at even more risk if they do. This is not justice. We are survivors and we deserve better.’

Demonstrators demanded that the CPS: 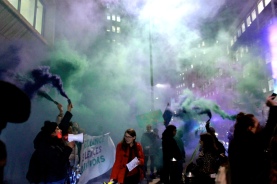 In their press release, Sisters Uncut state: ‘We’re sick of hearing about the impact on perpetrators. We demand that the CPS stops investigating survivors. Halt phone downloads now, and spend the money saved on transformative responses that genuinely disrupt sexual violence, rather than putting survivors on trial.’

What can you do?

Hannah Rose is a graduate of the MA Social Anthropology of the Global Economy at the University of Sussex, and works for GMB trade union.