Ayya’s Accounts is a most wonderful product of listening, narrating and co-writing between Anand Pandian, an anthropologist of Tamil descent born and bred in the US, and his grandfather, Ayya – as he is respectfully called by the family – a merchant whose life story started in colonial Burma and came to fruition in Madurai, South India. The book, which reads as an eminently enjoyable novel, presents an account of Ayya’s life as it was conveyed to Pandian over many conversations between the two of them, several other family members, and much-loved Paati, Ayya’s now deceased wife. The text consists of 27 short chapters, most of which are large chunks of Ayya’s Tamil voice translated into English and interspersed with shorter chapters by Pandian who offers ongoing reflections on what Ayya’s narratives contain, mean, reveal and hide as they were told to him over the years.

The title Ayya’s Accounts is intentionally plural. At one level, it refers to the rich accounts of life that Ayya keenly shared with his grandson, an ethnographer of Tamil Nadu who he teasingly prodded one day ‘When are you going to write my stor 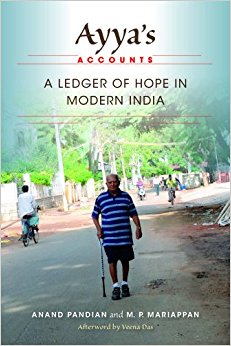 y?’ Starting with the birth of Ayya in 1919, the account covers a life straddling the 20th century: from Ayya’s early involvement with the family’s shop in Burma, to a rushed and traumatic overland return to India in late 1941, to adulthood as a respected merchant and husband with eight children back in the village, and finally retired life with a son’s family in Madurai, punctuated by visits to children and grandchildren across the US. But the title also refers to a core aspect of Ayya’s person: his life-long involvement with trade as a respected merchant and his love for – and obsession with – counting numbers, keeping accounts, and maintaining ledgers to record even the smallest of business transactions he concluded. Trade was what Ayya knew, what he was good at, and whose profits enabled him to educate his children in the pursuit of a better life.

While the rich and touching narratives contained in this book cannot be summarised here, three things – among many others – stand out for me. First, in the introductory pages Pandian ponders what the particular quirks of a single life story can tell us about modern India. What can be learned from the stories of a poor Nadar boy who started life running a shop with his brothers in Burma and ended up as a successful fruit merchant in Madurai?   The answer is, of course, that such a life story can teach us a great deal, and probably much more than what can be gleaned from grand narratives of Independence, freedom, economic development or religious tradition – in Ayya’s village, we learn, they didn’t even realise that Independence had happened until weeks after the event! Ayya’s successes and failures reveal the broader upward struggles of his caste whose members’ ulaippu (toil) and hardship ultimately translated into economic improvement and social mobility in post-Inde
pendence India. Or, as Veena Das summarises in her afterword, Ayya’s accounts are ‘a witness to the stupendous changes that took place in the caste to which Ayya belonged, in the political systems of the nations in which he tried to make his home, and to the ways aspirations changed as each generation tried to make a different future for itself’ (p. 200).

Second, Ayya’s life story contains unique material to reflect on agency, or what is left of it in a changing world that imposes opportunities and challenges rather than allowing individuals to pick and choose. Indeed, much of Ayya’s life course was not shaped by his own choices or wishes, but forced upon him by other people, other events, and good or bad luck. It was his father who brought him to Burma to work in the family shop, it was war that forced his return to India with his brother, it was his marriage to Paati that landed him in his in-laws’ textile shop, and it was his brother’s fruit trade that eventually made him into a prosperous merchant. Circumstances, one could call them, are what also led to the premature death of his daughter and to several of his adult children leaving the country in search of opportunities elsewhere. Ayya recounts his own story in terms of hard work, moral commitment, honesty and skill – and all of these were undoubtedly his assets. But his accounts also leave a strong trace of coming to terms with the realisation that one lacks agency, control, and grip on most life’s events.

Finally, the accounts provide wonderful insights into the ways in which as humans we confront the uncertainties and anxieties engendered by the unpredictability of life, and how we reconcile them with our aspirations for a ‘good life’ and a ‘moral life’ – topics Pandian has long engaged with in his work.

Uncertainty and anxiety about past experiences and unknown futures always abound. For Ayya, Pandian concludes, counting, recording, hard work and repaying one’s debts constitute practical ways – techniques – of retaining control, of creating some stability amidst the flux of everyday life, and of learning ‘simply to live with the unexpected’ (p. 191).

This book is anything but an ordinary ethnographic account of a life, it is a work of passion. The passion that Pandian holds for his family (reciprocated by them), for the power of listening and telling, for understanding life in contemporary India, and, perhaps most of all, for grasping how ordinary people make sense of what a good and moral life is all about. A book, intended as a tribute to his grandfather, does as much honour to anthropology and to the power of using narrative to convey social and personal lives. Ayya is a man who I for one would like to meet, and the accounts he and Pandian have left us are ones that I for one will use to help students gain insight into personal lives, aspirations and social change in India today. It is also highly recommended reading for anyone interested in questions of morality, meaning making and survival in a rapidly changing world.

Geert De Neve is Professor of Social Anthropology and South Asian Studies at the University of Sussex in Brighton, UK.