From the Field: Herat

Notes from the Field: Regional Connectivity as a Site for the Ethnography of Diplomacy, Afghanistan 6/10/16 – 6/11/16 was originally published on the University of Copenhagen’s Asian Dynamics Blog.

During this last year of research I have had the opportunity of attending a number of most thought provoking meetings. I have been able to treat them as both, events at which to engage at an academic level with the ideas informing the TRODITIES project, as well as sites in which to explore empirically the themes around which the project’s programme of research is organised.

A fascinating event at the Hanyang University in Seoul entitled ‘Silk Roads Again’ presented an opportunity to observe the tensions inherent in ideas of regional interconnectedness: a student from Central Asia studying in Seoul attacked the Iranian speaker for having failed to admit that Iranians erected barriers to trade and commerce between Central Asia and Arabia during the Sassanid period. Likewise, at a conference on China Arab relations at the National University of Singapore, papers consisting of scholarly explorations of the role played by West Asian merchants in connecting East Asia to Arabia in the pre-modern period, were juxtaposed with clearly formulated positions of the Chinese state’s vision of the ‘One Belt, One Road’ strategy. It is of course unsurprising that such academic conferences become the venue for the outpouring of contentious political standpoints and the display of diplomatic skills: much policy-making concerning Asian interconnectivity is currently couched in historical and cultural terms. It has also been interesting for me to compare the ways in which regional connectivity is debated and experienced in such contexts in comparison to the sites of the more ‘everyday forms of diplomacy’ that I usually study ethnographically, such as when inside a minibus in northern Pakistan or a cafe in an ethnically diverse bazaar in Tajikistan.

Of all the conferences I have attended over the course of the past year of travel and research however it is the Herat Security Dialogue conference held in the western Afghan city of Herat that offered some of the most profound insights into conducting an anthropology of diplomacy and geopolitics in the heart of Asia. How many conferences involve the near chartering of aeroplanes to take delegates from the capital city to the venue, or, for that matter, result in an academic taking a cramped aeroplane seat next to the former Head of Pakistan’s Inter-Service Intelligence Agency? The prospect of being driven from Herat’s airport to the hotel in an armoured convoy that had also necessitated the closure to public traffic of the main road running through the city also no doubt raised the tempo of the panels and discussions to follow. 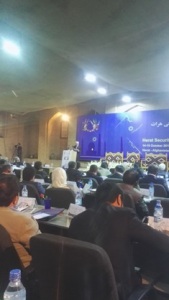 The venue of the Herat security dialogue itself was nowhere other than Herat’s ancient citadel, which has recently been refurbished with the support of the Aga Khan Trust for Culture, and was guarded by carefully positioned tanks and snipers for the day’s proceedings. As would be expected for an event that seeks to address the security issues facing Afghanistan and the wider region in which it is located, the guest list was formidable in its heterogeneity. The guests thus included the former Head of the ISI and other top brass in the Pakistani military, the Emirate of Afghanistan’s Taliban-era Ambassador to Pakistan, a Deputy Foreign Minister of Iran, a Former Foreign Minister of Afghanistan with Maoist credentials, and the Chinese and Turkish Ambassador to Afghanistan, not to mention several MPs and Ministers in the current Afghan government. Given the general attitude towards British influence in the region, it was unsurprising that the number of delegates from the UK totalled 1.

The discussion was as lively as a glance over the list of invited individuals suggested that it might be. It was to be expected that Pakistan’s role in Afghanistan’s security would be a contentious source of debate throughout the entirety of the two day conference (which it was, especially so in a fiery interchange between an academic from the USA and a former General in the Pakistan Army). But sparks also flew as the Chinese Ambassador was called up by members of the audience for his country’s support of Pakistan, which, he surely knew, was cited as a source of terrorism in the region. The conference’s debates continued to cause a stir in the regional media for several days after it was formally declared closed, as the USA-Pakistan altercation was aired in local newspapers, and the presenter of the keynote address accused of having tarred the UAE with the brush of being a supporter of Islamic terrorism.

Strikingly, there could not have been more of a contrast between the robust discussions on the conference floor with the urbane and cosmopolitan nature of the events organised on its fringes: performances of Herati Sufi music, lunches organised in the inner rooms of the citadel, evenings spent with lemon and mint water pipes as well as sweet Iranian dates, and the odd glass of what the organiser tactfully referred to as ‘energy drink’, made sure that there was barely even a risk of the day’s disagreements getting in the way of the evening’s conviviality.

Besides hearing and participating in the debates, the conference also afforded me the possibility of visiting the ancient city of Herat, including walking down the streets of its old and long vacated Jewish quarter (kucha musaiha), visiting the Timurid-era bazaar in which locally produced silk can still be found, walking around several religious sites, including the shrine of the great Abdullah Ansari, and talking to Herati traders about security along the routes from which Chinese goods arrive in Afghanistan from both the Iranian sea port of Bandar Abbas and the Turkmenistan-Afghanistan overland border post of Turghundi. In terms of the aims and goals of the TRODITIES project, the Herat Security Dialogue also helped to crystallise the pervasive importance of a domain of the traders’ worlds that we are exploring: the sphere of the geopolitical. I continue to find it difficult to think anthropologically about the geopolitical, not least I suppose because of my training in the classical anthropological tradition that emphasises the role played by  ethnography bringing recognition to local agency. In this context, attending conferences such as the Herat Security Dialogue is very helpful for sharpening one’s thinking about how interregional connectivity or geopolitics more generally might be thought of ethnographically as something that is vividly experienced and debated.

In what for me has been a year of field research combined with some conference attendance, the ability to organise such an event in the conditions of present day Afghanistan stands out as a remarkable form of diplomatic talent. Let’s hope that the fallout from the BREXIT vote doesn’t mean that we will need a police escort to safely transfer delegates from the Jury’s Inn in Brighton to the University of Sussex campus at the proposed West Asia-Inter Asia meeting to be held in Sussex on May 16th. Even if things don’t get so bad, I am sure that that conference as much as any other that deals with connections between different parts of this region will require the exercise of diplomatic skills, however broadly these might be defined.

Magnus Marsden is Professor of Social Anthropology at the University of Sussex and Director of the University of Sussex Asia Centre. He has spent fifteen years conducting research in both Afghanistan and Pakistan and, with Benjamin Hopkins, is the author of Fragments of the Afghan Frontier and editor of Beyond Swat: History, Society and Economy Along the Afghanistan-Pakistan Frontier. His most recent book,Trading Worlds: Afghan Merchants Across Modern Frontiers, was published by Hurst in March 2016. He is currently PI of an ERC Advanced project entitled: ‘Trust, Global Traders and Commodities in a Chinese International Trade City.’